Fragonard’s “The Swing” and a Little Dog 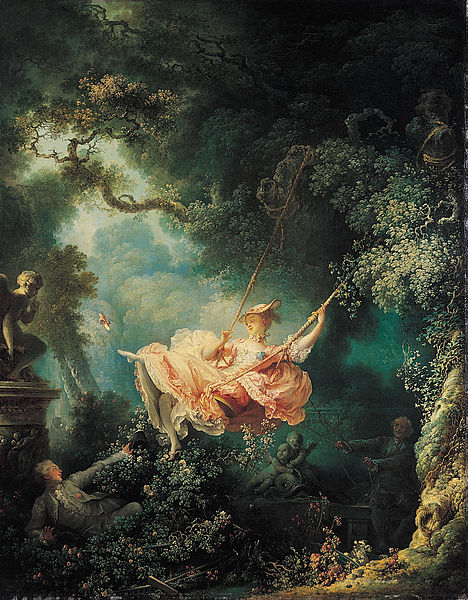 The first art history paper I ever wrote in college was on Fragonard’s The Swing (shown above). I remember writing about the Rococo style and the rise of the French aristocracy in the 18th century. I also remember discussing how this scene represents a young woman who is being pushed on a swing by an older man (shown in the background on the right). This older suitor or husband seems unaware, however, that a younger suitor is hiding in the bushes (on the left). To put it mildly, this younger suitor is getting a very privileged viewpoint of his beloved on the swing: he can look up her dress!1 She, in turn, kicks off her shoe (a symbol of sexuality) in the direction of the young suitor. I think that the shoe also seems to fly in the air as a defiant gesture toward the cupid figure on the right, who holds a cautionary finger to his lips (seen by some as a symbol of discretion).2

I remember feeling so sure of myself when I submitted my final draft of this paper, which I think was no more than 6-8 pages in length. As a naive little student, I felt like I had mastered that painting and knew everything that there was to know about it. Boy, was I wrong about that!

Since writing that paper several years ago, I have learned several new things about this painting by Fragonard. I even have spotted some new details after watching a Smarthistory video clip on the painting. I really like this short clip, and I actually am assigning some of my art history students to watch this video as part of a homework assignment.

One of the things mentioned in this video, which I had never spotted previously, is the inclusion of a little tiny dog in the bottom right corner of the painting, not too far from the feet of the older suitor. The dog is standing on its hind legs and appears to be yapping. It’s easy for the viewer to miss this little detail at first glance; the bouncy curls in the dog’s coat look similar to the surrounding flower petals and leaves. 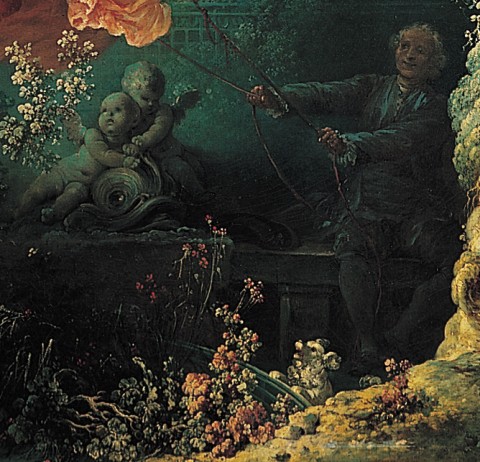 So why is the dog included in this scene? The Smarthistory video raises the issue that the dog, which normally appears in art as a symbol of fidelity, obviously is inappropriate in this context. But, considering that the dog seems agitated and upset, perhaps the symbol still is appropriate. Does anyone have any thoughts? Now that I have noticed the dog, I think that there might even be some interaction between the discretionary cupid figure (with its finger toward its lips) and the yapping dog. The cupid might be trying to get the dog to quiet down while the lovers enjoy a rather, ahem, intimate moment.

There is one thing in the Smarthistory video that I think it interesting, but I’m not sure that I accept. The video suggests that in the background of the scene, the two cupid figures might be sitting next to a beehive (which could be seen as a symbol for the “sting of love”). This is an interesting idea, but I’ve always thought that the figures were sitting next to a large fish. The fish is looking toward the viewer with a large eye, a gaping mouth, and thick lips (see below). I obviously am not alone in my interpretation, since other commenters on the Smarthistory page mentioned the same thing. (By the way, you should check out the comments. They are absolutely fascinating.) 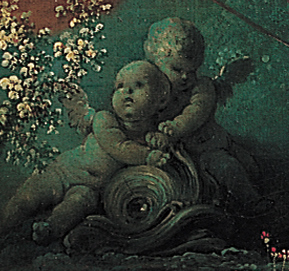 It makes sense that a fish would be depicted here for a few reasons: first of all fish (and more specifically, dolphins) were associated with the imagery for Venus, the goddess of love. According to some mythological accounts, Venus was born out of the sea. Fish also would be appropriate for French Rococo imagery, which often includes motifs of plants, rocks, shells, foam, etc. Fish were even included as decorative features during this period, as can be seen on some fish-shaped vases.

Do you see a fish or a beehive in this painting? What do you think about the inclusion of the dog? Any other thoughts about this painting?

1This privileged view and “happy accident” for the young suitor was quite intentional subject matter on part of the patron, Baron de Saint-Julien. Saint-Julien specified the details of the painting and wanted his mistress to be depicted as the woman in the scene. The baron also wanted to include a clever pun with his chosen theme, since he served as the government representative who collected taxes paid by the Church. His government title was “Receiver of the general goods offered by the clergy” (Receveur général des biens du clergé). Saint-Julien originally requested that the older gentleman be represented as a bishop, but it appears that Fragonard omitted a such an impudent reference to the Church. Nonetheless, the older suitor (who may be clergyman or a husband) is delivering “goods” to be seen by the young suitor. See David A. Wilkins, “Art Past Art Present,” 6th ed. (Upper Saddle River, New Jersey: Prentice Hall, 2009), 408.

2 Along the lines of discretion, some feel that the cupid “enjoins [the young suitor] to keep the secret of what he has seen.” See Wilkins, 408.