I have a new appreciation for St. Benedict of Nursia (480-547 CE) this afternoon, just having spent a few hours pulling wild thornbushes out of my backyard. I think that is the most grueling and painful exercise I have ever had while gardening, even though I was equipped with gloves and protective clothing. But back to St. Benedict: while battling these bushes, I couldn’t help but think of the the saint. According to legend, Benedict cast himself into a thorn bush while naked, to escape the wily temptation of a woman.

When I discuss Benedict in my art classes, I sometimes joke with my students that the thornbush experience was the early equivalent to “taking a cold shower” today. (And it was, at least for some monks!) But since this morning I have a new appreciation for thornbush hoppers. Anyone who willingly throws himself into a thornbush – with the intent of getting pricked – deserves sainthood in my opinion. Definitely.

I thought it would be fun to post some images of Benedict and the thornbush. I was only familiar with a few examples before writing this post, and frankly, I’ve been surprised that I can’t find more works of art dedicated to this legend online. Perhaps monastics wanted to remember that Benedict overcame temptation, but not necessarily focus on exactly how he overcame temptation? Or perhaps there are more images that exist, but they are cloistered away from the public eye? Any medievalists have thoughts on this topic? 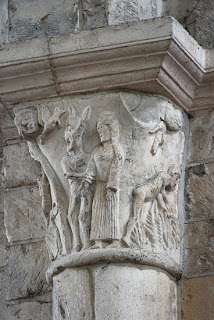 Hermann Nigg, Saint Benedict Writing the Rules, c. 1926
Although I don’t think this painting is fantastic, I think it’s interesting that the artist included a thorny bush on the side of the painting. This painting depicts Benedict writing his sacred maxims and precepts; these Rules have come to be part of the foundation for monastic living in Western society.
I found another fresco described online (without an image, unfortunately) at the Subiaco Monastery, just southeast of Rome. In this fresco, Saint Francis is grafting roses onto the thornbushes into which Saint Benedict threw himself. I think that the choice of Saint Francis is especially appropriate, since Saint Francis was also known to throw himself into thornbushes to avoid sexual temptation.
The Minneapolis Institute of Arts has proposed some interesting symbolism for thorny plants, given this context of Saint Francis and Saint Benedict. It may be that in some situations thorny plants symbolized chastity and virtue, since these plants functioned as an aid for sexual abstinence!