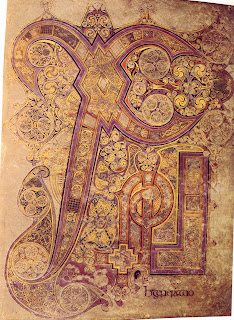 I sometimes have trouble finding satisfying discussions of illuminated manuscripts in general art history textbooks. I have found that many descriptions, while very informative about a specific illumination or artistic style, tend to focus on illuminated manuscript pages as isolated works of art. Although I realize that such isolated descriptions are part and parcel of the general survey textbook (it’s impossible to discuss everything in depth!), I still am a little disappointed. I feel like medieval gospel books were meant to be experienced as cohesive whole, not as merely isolated illuminations.

One such example of an isolated description can be found in a recent edition of Gardner’s Art Through the Ages, which discusses the “Chi-rho-iota (XPI)” page, folio 34 recto of the Book of Kells (c. 800, shown right). Although I really like that Gardner’s touches on historical context by explaining that this particular passage would be read on Christmas Day, I feel like a sense of the illustration within the biblical text and Book of Kells itself (as a whole) is relatively lacking.

This being said, I was quite delighted when I read the following passage yesterday afternoon (see below). This is one of the best descriptions of Folio 34 that I have seen in an introductory textbook. Although the passage doesn’t exactly describe the folio in relation to any other pages in the book (and, as I mentioned earlier, I realize such analysis is largely beyond the scope of an introductory textbook), I really like that the author tries to tie the decoration of the page into the actual context of Saint Matthew’s gospel:

“The earliest surviving Hiberno-Saxon religious manuscripts reveal and interest in decorating the letters themselves, a not surprising development when we remember that the words were believed to be proclamations of God. This tendency reaches its peak in the Book of Kells. When the text discussing the life of Christ in the Gospel of Saint Matthew (1:22) reaches the point where the Incarnation of Christ is mentioned, the letters burst out into joyful, exuberant patterns. This whole page is devoted to three words – Christi autem generatio (“the birth of Christ”) – with most of the page devoted to the first three letters of Christi (XPI). The X is the dominant form, and it surges outward in bold and varied curves to embrace Hiberno-Saxon whorl patterns. Interlace fills other areas, and simple colored frames set off the large initials amid the consuming excitement. The human head that forms the end of the P also dots the I. Near the lower left base of the X, a small scene shows cats watching while two mice fight over a round wafter similar to those used in the Mass – a scene surely of symbolic intent, even if its meaning is lost to us today. The pulsating vitality of the word of God is thus visually demonstrated.”1

Have you found any descriptions of illuminated manuscripts that you like? Do you know of other descriptions that help the reader to better understand either the biblical context or the folio’s physical context within the gospel book itself?

UPDATE: The Book of Kells is available online as a digital copy through the Trinity College Library in Dublin (which has the book in its permanent collection). You can see a high-res copy of the Book of Matthew, for example, with Folio 34 HERE. The library also has provided an introductory page to the Book of Kells.