Versailles and France as "Art Capital" of the World 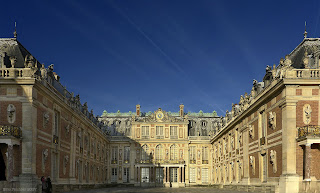 I think Versailles is a big deal. And I don’t mean that the palace of Versailles is big in terms of physical space (that fact is beyond obvious!), but I have long thought that Versailles needs to have more recognition for its role in art history – particularly in terms of why France became the art capital of the world in the 18th and 19th centuries.

Up until this point, I’ve never seen a fantastic explanation for how and why the artistic scene shifted from Italy (and Southern Europe) to France. A lot of possible ideas for this shift could be put forth, such as the establishment of the Academie de peinture et de sculpture (Paris) in 1648. Obviously, this artistic academy helped to promote art and establish France within the artistic scene, but I don’t think that this event caused Europe to focus its attention on France. Likewise, if one looks to the 18th century, it is easy to pinpoint how the establishment of the Louvre museum in 1763 was connected to France’s preeminence among the arts (not only so that artists could study art, but in terms of France becoming a major artistic attraction for tourists).

Although these are both very significant events, I don’t think that either the Louvre or French Academy was the initial cause of a major geographic shift in Europe’s artistic scene. Instead, I really think that it was the redesign of Versailles which brought France to the forefront of the European art scene. Versailles, which originally functioned as a hunting lodge, underwent a major redesign and enlargement in the 17th century. One of the major additions to the palace was begun by the architect Le Vau in 1668. Subsequent additions, remodels, and changes were made over the next several years (including he creation of the “Hall of Mirrors,” which was begun in 1678 by Hardouin-Mansart and Le Brun). Louis XIV finally moved to the palace in 1682, and eventually required his court to live at the palace as well.

Versailles was over-the-top in terms of luxury, space, and design. It was so huge and so ostentatious that it immediately attracted the attention of other countries. In fact, Versailles was so impressive that many European monarchs wanted to model their own palaces after Versailles. Subsequently, Baroque palaces popped up all over Europe. You can see a great compilation of Baroque residences here (complete with photographs). One such Versailles-inspired palace was the Würzburg Residenz, in Würzburg, Germany (1720-1744, shown above). In essence, Louis XVI became a major trend-setter with Versailles. Everyone wanted to live like him. And, consequently, I think that this is the reason that the art world moved to France. Europeans focused their attention to French art and architecture, a focus that would continue for over two centuries.

Although I don’t think that Versailles is the sole reason that the artistic scene shifted to France, I think the remodeling and establishment of court at Versailles are very pivotal points in art history. Obviously, I’m a little biased as a Baroque scholar, but I can’t overlook Versailles on this point. It’s just too big – both physically and metaphorically!

Can you think of historical events which helped to foster (or solidify the presence of) the artistic scene in France?

*Photo of Versailles courtesy of Eric Pouhier, as found on Wikipedia.