The Laocoön: Bandinelli vs. Michelangelo

I guess the Renaissance artist Baccio Bandinelli has been on my mind lately. I realized that somehow I managed to bring up Bandinelli in each of my classes this past week – including my ancient art class! 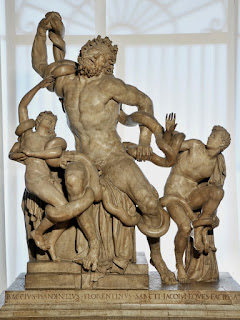 To be fair to myself, I better say that I didn’t stray too far on a tangent with my ancient art students. I was discussing the classical statue Laocoön (1st century BC) with these students and happened to mention Bandinelli’s Laocoön (1520, shown left). It is not surprising that Renaissance artists and patrons were interested in copying the Laocoön sculpture, because the sculpture was excavated in 1506 after its discovery in a vineyard.

The Laocoön quickly captured the attention of Renaissance artists. Only a few years later, around 1510, the Renaissance architect Bramante hosted a contest between artists to determine who could make a wax version of the ancient Laocoön that could be cast into bronze. Raphael was selected as the judge, and Sansovino received first prize – for a version that has now been lost.

It is too bad that Sansovino’s original version has been lost, because it would give us a better indication of the earliest Renaissance mindset toward this sculpture: when the original, classical Laocoön group was discovered, the central figure’s right arm was missing. Renaissance artists grappled with the idea of how to accurate reconstruct the appearance of the original sculpture. For example, ten years after the Laocoön contest, the sculptor Baccio Bandinelli made additional copies of the Laocoön, and also created a wax arm as a “restoration” for the original Laocoön sculpture in the Vatican. Bandinelli’s composition ends up being very important and influential for later artists, particularly because Bandinelli completely recreates the central figure with an extended right arm above the head.

There are a few reasons why Bandinelli’s composition was so influential: 1) the original Laocoön displayed Bandinelli’s wax-arm restoration, and 2) Bandinelli’s marble copy was commissioned by a major patron of the arts, Cardinal Giulio dei Medici. This marble copy originally was intended as a gift for Francis I, the King of France. However, it appears that Cardinal Giulio dei Medici (who later became Pope Clement VII) liked the sculpture too well to part with it, since it eventually ended up in the courtyard of the Palazzo Medici.

Subsequently, other artists began to copy Bandinelli’s version, incorporating the straight-arm version. Some believe that the V&A copy is a later Renaissance version made by Sansovino, although the museum maintains that the object is from the 17th-18th centuries. Regardless, the lasting influence of Bandinelli’s composition on subsequent copies is well documented in images from the 16th-19th centuries (see this timeline for some examples).

Not everyone in the Renaissance was pleased with Bandinelli’s compositional choices, however. The great artist Michelangelo, in contrast, felt that the originally arm of the Laocoön probably appeared bent. Bandinelli and Michelangelo were life-long rivals, and this difference in opinion is just one example of the opposition and tension between these artists. (I should say, though, I think Bandinelli felt the rivalry more than Michelangelo, although letters to Michelangelo (see here and here) indicate that he was keenly aware (curious?) of what Bandinelli was doing.) 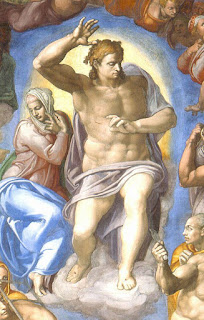 Regardless of the opposition from Michelangelo, Bandinelli’s proposal for the Laocoön arm came to be generally accepted. Bandinelli must have relished the fact that he – not Michelangelo – received the invitations to create the wax arm reconstruction and the Medici copy. To add insult to injury, Michelangelo had been present the day that the Laocoön was unearthed in Rome. No doubt Michelangelo felt a certain affinity and connection with the classical sculpture. Scholars have even noted that Michelangelo’s figure of Christ in the Last Judgment (Sistine Chapel, 1537-1541, shown right)) was inspired by the classical Laocoön (and note that Christ’s raised arm is bent!).1 Perhaps Michelangelo felt like he was getting “the last Word” with Bandinelli by including that visual reference in his fresco?

Either way, Michelangelo finally got validation in the 20th century (ha – as if Michelangelo needs more validation in the art world!). In 1906 a bent arm was discovered in Rome in a stonemason’s shop (by a sharp-eyed German archaeologist named Ludwig Pollak), and in the 1950s it was generally accepted that this was the arm which had broken off of the Laocoön composition. The current restoration of the classical statue shows a bent arm. So it looks like Michelangelo was right all along!

Do you know any more stories about the rivalry between Michelangelo and Bandinelli? Vasari records that Bandinelli tore a cartoon by Michelangelo into small pieces (you can see Aristotile da San Gallo’s copy of the cartoon, which depicted the Battle of Cascina, here). I know that the topic of rivalry and Bandinelli’s jealously are of interest to many scholars. If you know of any other stories – do share!

*Some readers may remember that I touched on this Laocoön topic last year. If you’re interested for a little more information (and some links), see here.

1 Michael P. Kemling, “Michaelangelo’s ‘Last Judgment’: The Influence of ‘Lacoon and His Sons,'” (University of Georgia, 2003, available online here). For the discussion of the figure of Christ specifically, see Chapter 2.