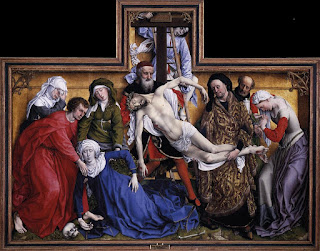 Occasionally a student will ask me about why Rogier van der Weyden’s Deposition altarpiece (also called “Descent from the Cross, c. 1440, shown left) is formed in an unusual shape. Up until this point, I have always answered that the shape (which looks like an inverted “T”) was a traditional form for altarpieces in Northern Europe. Although this answer is true, I have recently learned that I could give a much more detailed response to my students. In a fascinating article, “The Inverted “T”-Shape in Early Netherlandish Altarpieces: Studies in the Relation between Painting and Sculpture,” scholar Lynn F. Jacobs explores some reasons for why this particular shape would have contained significance, meaning, and specific purpose. 1 I wanted to highlight some of her ideas here:

What suggestion do you particularly like? Do you have a favorite Netherlandish altarpiece that is formed in an inverted “T” shape?