I hope the title of my post grabbed your attention! I’ve been reading a terribly interesting book this afternoon: Picturing Women in Renaissance and Baroque Italy. This book includes a chapter by Caroline P. Murphy, a scholar on 16th century artist Lavinia Fontana.1 Murphy’s chapter discusses how art was used in conjunction with the conception and delivery of children, and it’s absolutely fascinating.

To introduce this aspect of her argument, Murphy mentions how people in early modern Europe were both “appalled and fascinated by the birth of monstrous children” (e.g. children with severe birth defects).2 It was believed in order to avoid the conception of a monstrous child, a woman should look at pictures of beautiful figures. In essence, this beautiful image was supposed to have “a positive morphological effect on the child in [the woman’s] womb.”3 Consequently, some pictures with beautiful figures were designed so that they could be placed over a bed or attached to the bedframe (since the bed was the place where sexual intercourse would take place). In addition, a pregnant woman would spend much of her time resting on the bed, and she would have additional opportunities to look at the beautiful figures (and positively affect the growth of the child).

So what constituted a “beautiful figure” in 16th century Bologna, the city in which Lavinia Fontana worked? You may be think that such figures were mythological, such as Venus or Cupid. Actually, due to the Counter-Reformation and promotion of religious imagery, it is more likely that women looked at images of Mary and the Christ Child. Murphy mentions a few Holy Family paintings by Lavinia Fontana which were probably bought for married couples, one being The Virgin Adoring the Sleeping Christ Child (Boston Museum of Fine Arts). 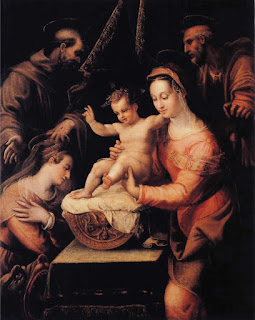 However, I think there is one more painting by Fontana which should be added to Murphy’s discussion. Given Murphy’s emphasis on childbirth, I think it’s surprising that she did not discuss Fontana’s Holy Family with Saints Margaret and Francis (1578, shown right) in her article.* Not only do these beautiful figures fit with other Holy Family images that Murphy discusses, but this painting also includes a depiction of Saint Margaret: the patron saint of childbirth! (Saint Margaret is identified on the left, through her symbol of the dragon.)

Couldn’t this image have been a source of comfort to pregnant women at the time? Murphy mentions how some images of the Holy Family include St. Elizabeth; the inclusion of St. Elizabeth would have been comforting for a female viewer, particularly a woman who was attempting to get pregnant (since Elizabeth conceived in old age). Although this painting does not depict Elizabeth, I think this inclusion of St. Margaret in this painting would have served as a source of comfort too (and it seems to be an even more appropriate connection, given St. Margaret’s role and patronage!).

Interestingly, the Davis Museum and Cultural Center of Wellesly College (which has this painting on loan), does not make any mention of Murphy’s argument in their webpage for this painting (and their bibliography does not cite Murphy). I’m going to have to write them – I think they need to slightly modify their discussion of this painting!

*Update: the comments section for this post discusses Murphy’s reasoning for not including this painting in her argument.