Some of my long-time readers will remember my previous post on Saint Lucy, whose iconography (or visual symbol) is a pair of eyeballs. I remember being struck by how St. Lucy’s iconography was so unusual (and kinda grotesque, in my opinion). Some comments on that previous post mentioned another unusual example of hagiographic iconography: Saint Agatha carries her breasts on a platter (see an example by Zurbaran here). Today, though, I remembered another female figure associated with kinda bizarre iconography: Diana of Ephesus. Although Diana (or “Artemis” to the ancient Greeks) isn’t a Catholic saint like Lucy and Agatha (she’s a fertility goddess from classical mythology), I would have to say that her iconography might be the most unusual of all. Take a look: 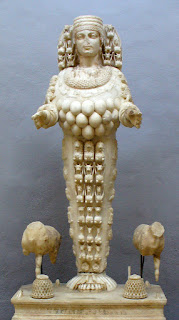 With breasts aplenty, it’s easy to tell that Diana of Ephesus was an ancient goddess of fertility, but her iconography might be little more complex than one would suppose! In 1979 a scholar name Gerard Seiterle pointed out that none of the supposed breasts of Diana/Artemis figurines have nipples. Seiterle argued that instead of breasts, Diana is laden will bull testes.1 This is an interesting argument for two reasons: 1) the bull was symbol of fertility in ancient times and 2) the altar at Ephesus would have been large enough to sacrifice a bull. Although Seiterle’s argument is not accepted by all scholars (I personally don’t feel quite convinced), it does add an interesting element to the discussion of Diana’s iconography, don’t you think?2 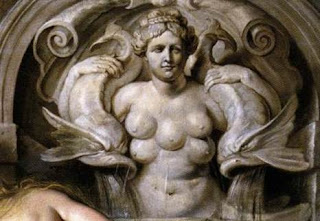 Diana of Ephesus, detail from The Discovery of the Child Erichtonius by Peter Paul Rubens, c. 1615 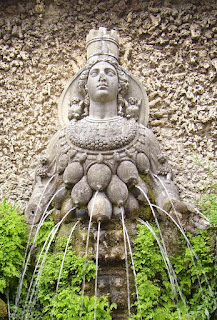 Diana of Ephesus was a very popular goddess in ancient times (in fact, some readers may be interested to know that worship of Diana is mentioned in the Bible (see Acts 19:28 and Acts 19:35). Additionally, Diana’s temple at Ephesus (Temple of Artemis) was one of the seven wonders of the ancient world. I get the sense, though, that she wasn’t as popular (and more specifically, her traditional iconography wasn’t as popular) in more recent artistic periods like the Renaissance (although some examples from later periods exist, as I’ve shown above).3 Perhaps Diana of Ephesus’ multi-breasted appearance was too far from the Renaissance standards of idealization?

If you can put forward a more unusual type of iconography than Diana of Ephesus, speak up!

*UPDATE (07/12): Upon visiting the Ephesus Archaeological Museum this past summer, I purchased a copy of the museum catalog. The museum wholly endorses Seiterle’s interpretation. This is what the catalog says, “The distinctive feature that all these three statues [the Great Artemis, the Beautiful Artemis, and the Little Artemis statuette] have in common in the presence of multiple pieces resembling eggs, hanging on the goddess, who was thought to have a connection with the way of worship, and initially, since these were believed to be breasts, the Artemis Ephesia was referred to as the Multi-breasted Artemis for years. Interpretations regarding them as bunches of grapes, dates or eggs, however, did not gain much credence.

In 1978, G. Seiterle came up with a new interpretation. He claimed that these pieces resembling eggs were bull testicles offered to the goddess in religious rituals, as a symbol of fertility. In order to prove his claim, he presented a reconstruction of the statue with testicles hung on it. The resulting sight was identical with the statue!

Excavations at around the altar of the temple also indicated that the bull had a great cultural impact for the Artemis cult. Thus the much-debated academic question was resolved.”4

2 Wikipedia mentions here that Seiterle’s argument was “accepted in the 1980s by Walter Burkert and Brita Alroth, among others, criticised and rejected by Robert Fleischer, but widely popularized.” For an argument against Seiterle, see Fleischer, “Neues zur kleinasiatischen Kultstatue” Archäologischer Anzeiger 98 1983:81-93; Bammer 1990:153.

3 It’s interesting to note that a Renaissance humanist scholar might have been interested in Diana of Ephesus, though. It’s possible that Andrea Odoni is holding a statuette of Diana of Ephesus in his portrait (painted by Lorenzo Lotti, 1527). See portrait and discussion here.