I’m getting ready to teach a lecture on Alberti’s theories regarding the type of painting called istoria (also seen as historia). In his treatise On Painting (1435), Alberti argued that istoria painting is the highest goal and achievement for an artist. An istoria is a narrative painting which includes a complex composition and a large number of figures. Furthermore, these figures should be displayed in several dramatic and emotive poses. Alberti felt that “everything the people in the painting do among themselves, or perform in relation to the spectators, must fit together to represent and explain the ‘historia.'”1

One of Alberti’s most interesting ideas about istoria has to do with how the painting communicates and involves the viewer. Alberti found that an istoria painting is most effective if there is a figure in the painting who directly communicates with the viewer. He wrote, “I like there be someone in the ‘historia’ who tells the spectators what is going on, and either beckons them with his hand to look, or with ferocious expression and forbidding glance challenges them not to come near, as if he wished their business to be secret, or points to some danger or some remarkable secret, or by his gestures invites you to laugh or to weep with them.”2

I think one of the best ways for istoria figures to communicate with the viewer is through an outward glance (as if the figure was actually looking at the viewer).3 I know that there are tons of examples of such outward glances, but here is just a small sample of my favorites:

Two figures gaze outwards (while one of them beckons toward the viewer – Alberti would be so pleased!) in Ghirlandaio’s Adoration of the Magi (1488). The staring figure near the top of the detail is a supposed self-portrait of Ghirlandaio. 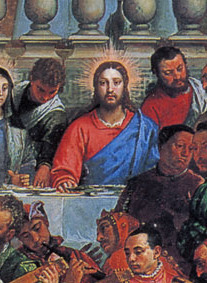 Christ stares out at the viewer, amid all of the hustle and bustle found in Veronese’s The Wedding Feast at Cana (1562-63)

An alleged self-portrait of Botticelli. The artist is gazing at the viewer from the foreground of his painting, Adoration of the Magi (c. 1475) 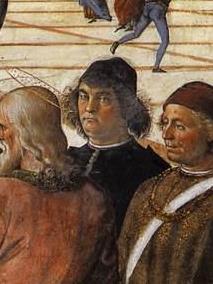 This one is also a supposed self-portrait of the artist Perugino, found within his painting Christ Giving the Keys to Saint Peter (1481)

I think it’s interesting that so many painters decided to include themselves as the token “communicating figure” within their paintings. The examples by Ghirlandaio, Botticelli and Perugino are a small sampling of the staring/communicating self-portraits which exist. (To give you an idea, other such self-portraits were done by are Jacopo Pontormo (see here), Raphael (see here) and Fillipo Lippi (see here and here). But, the more that I think about it, the inclusion of the self-portrait is very fitting for historia painting, particularly when considering Alberti’s thoughts on communication. After all, if at least one figure is responsible for communicating to the viewer (and drawing the viewer into the scene), shouldn’t that figure be the artist?!? Makes sense to me.

What about you? What paintings do you enjoy where a figure is staring outwards at (or beckoning toward) the viewer? I know there are tons of them out there – especially from the Italian Renaissance period!

1 Leon Battista Alberti and Martin Kemp, On Painting (New York: Penguin Press, 1991), 78. Citation available online at: http://books.google.com/books?id=TCONFPbKwUQC&lpg=PP1&ots=s__tfpeQGz&dq=alberti%20%22on%20painting%22&pg=PA77#v=onepage&q&f=false
2 Ibid., 77-78.
3 It should be noted that many painters followed Alberti’s advice by including a figure in communication with the viewer, but not directly looking at the viewer. For example, Ghirlandaio’s Adoration of the Shepherds (1485) shows a shepherd who is pointing (to communicate with the viewer), but the shepherd’s gaze is toward another figure in the painting.