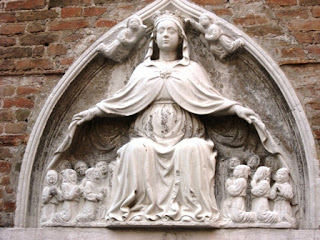 Madonna della Misericordia, Church of San Tomá, Venice, mid 14th century to early 15th century
Remember Y2K? I can’t believe that it has been ten years since we experienced the Y2K drama and anxiety. I recall that my mom gave our neighbors hand-powered flashlights as a holiday gift that year (almost entirely in jest).
Remember how some people proclaimed that Y2K would bring the end of the world? This actually isn’t surprising, since history has shown a repeated end-of-the-world fear with the approach of a new year/century/millenium. Actually, it’s interesting to see how this fear even has affected art. I think the most prominent (and interesting) example is the imagery for Our Mother of Mercy, which displays the Virgin protectively taking her protégés/children underneath her cloak (see a late medieval example above). Henry Kraus has discussed that this iconography developed in the tenth century by the order of Cluny, “possibly in response to the terror of the world’s end that spread abroad with the approach of the Year Thousand.”1 This protective, loving image of the Virgin must have brought comfort to devout medieval worshipers who feared that the world was ending in Y1K.
Is it safe to argue, then, that the Middle Ages experienced a “Y1K”? I think so. The iconography for Our Mother of Mercy gives evidence for it! Ha!
Do you have a favorite work of art that is inspired by an end-of-the-world theme?
Having written about this end-of-the-world gloom, it seems a little ironic to wish everyone a Happy New Year. Nonetheless, I hope that this upcoming year is better and brighter for everyone. Personally, I’m not focusing on possibilities that the world will end anytime in 2011. In fact, I’ve already thought to write a post on Mayan art with the advent of 2012… 😉
Happy New Year!
1 Henry Kraus, “Eve and Mary: Conflicting Images of Medieval Woman,” in Feminism and Art History: Questioning the Litany by Norma Broude and Mary D. Garrard, eds. (Boulder, Colorado: Westview Press, 1982), 84. See also Mlle. Chatel, “Le culte de la vierge Marie en France, du Ve au XIIIe siécle,” Théses-Sorbonne (Paris, 1945): 151-52.