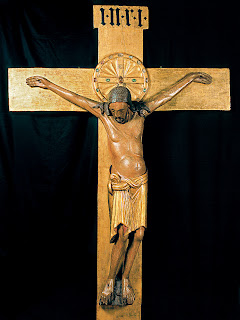 Okay, Ottonian art experts, I need help. I’m trying to resolve an issue regarding the Crucifix of Gero (c. 970, Cologne Cathedral, shown left). The most recent editions of Gardner’s Art Through the Ages and Stokstad’s Art History mention that this statue functions as a reliquary. According to both books, a cavity in the back of Christ’s head contains a piece of the Host.1

HOWEVER, I recently read here that no cavity exists behind the sculpture. “Despite older sources even citing the exact dimensions of such a reliquary opening in the Cologne sculpture, the restoration of the Gero Cross in 1976 revealed that no receptacle exists in the corpus’ head.”2

What’s the real story behind this? Who should I believe? I’m inclined to believe the 1976 restoration news, but it seems incredulous that both major art history textbooks would have missed the “There is no reliquary cavity!” memo that was written almost 35 years ago. Did any further evidence come about after the 1976 restoration? Or should I continue to lose faith in canonical art history textbooks?

One other thought. Despite that there might not be an opening in its back, I think this statue could still function as a reliquary: in the 10th century Archbishop Gero allegedly placed the Host and True Cross in the once-cracked wood of the statue (see footnote #2 below). But I guess there’s no way to prove that miraculous story through scientific analysis, is there?

2 Søren Kaspersen and Erik Thunø, Decorating the Lord’s Table: On the Dynamics Between Image and Altar in the Middle Ages (Copenhagen: Museum Tusculanum Press, 2006), 59 (available online here). This same book also mentions the tradition of how the Crucifix of Gero came to be a so-called reliquary: “The early eleventh century Chronicon of Thietmar of Merseburg contains a miracle story involving Gero of Cologne, who served as archbishop from 969 to 976. The passage in Chapter Two of Book Three reads: ‘Meanwhile, Archbishop Gero of the see of Cologne died. As I have only spoken briefly about him, I will not relate a few things which I previously held back. He had a crucifix artfully made out of wood, which now stands above his grave, in the middle of the church. When he noticed a fissure in the crucifix’s head, he healed it, trusting not in himself, but rather in the healthy remedy of the highest artisan. He took a portion of the body of the Lord, our unique comfort in every necessity, and part of the health-bringing cross, and placed them together in the crack. Then, prostrating himself, he tearfully invoked the name of the Lord. When he arose, he found that the damage had been healed through his humble benediction.'” See Kaspersen and Thunø, 45-46 (available online here).