It is the Thanksgiving holiday this week in the US, which means that Americans tend to focus on things for which they are thankful. I thought it would be fun to compile a list of the formal elements in art for which I am grateful. In other words, these are all of the physical (formal) aspects of art which I find aesthetically pleasing. To me, these things make art beautiful:

I am grateful for compositions with strong diagonals.
Athena Battling Alkyoneos, Detail of the Gigantomachy Freize from the Altar of Zeus, c. 175 BC 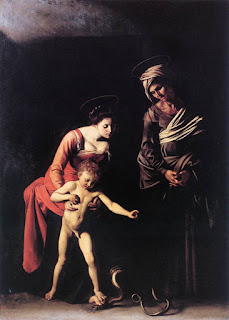 I am grateful for strong light and dark contrasts.
Caravaggio, Madonna of the Snake, 1606 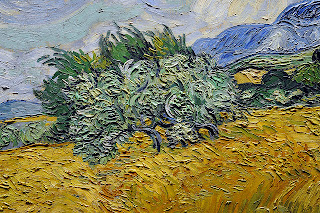 I am grateful for impasto.
Van Gogh, detail of Wheat Field with Cypresses, 1889 (Metropolitan Museum) 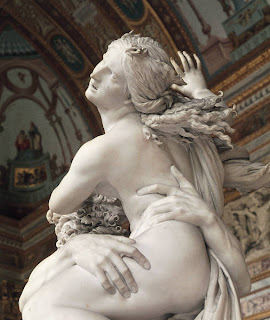 I am grateful for volume, particularly when it creates
an illusion of the human figure.
(Look at how Pluto’s fingers press into Proserpina’s body!)
Bernini, detail of Pluto and Proserpina, 1621-22 (Borghese Gallery) 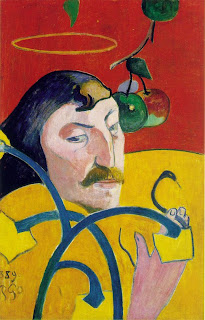 I am grateful for flat planes of solid color.
Gauguin, Self Portrait with Halo, 1889 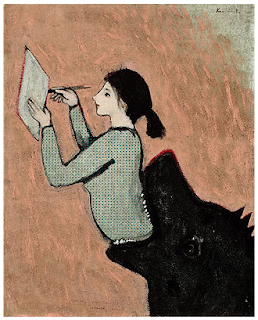 I am grateful for thick, dark outlines of figures.
Brian Kershisnik, Artist Devoured by a Terrible Beast, n.d.

I am grateful for monochromatic backgrounds.
Whistler, Arrangement in Grey and Black: Portrait of the Artist’s Mother, 1871

I am grateful for the luminescent colors afforded by oil paint.
Robert Campin, detail of the Merode Altarpiece, 1425-28

You can really tell what artistic periods (and centuries) I prefer, huh? What formal elements are YOU grateful for?
— 12 Comments 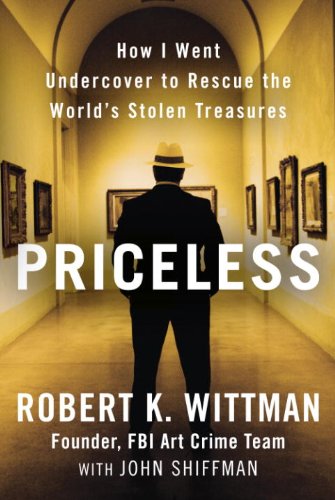 I recently finished reading Robert K. Wittman’s book Priceless: How I Went Undercover to Rescue the World’s Stolen Treasures. I had waited several weeks (months?) to get my hands on a library copy of this book, and became even more anxious after reading this great review of the book on Truth, Beauty, Freedom and Books.

The wait paid off, though. Not only is this book entertaining and informative, but it also gives a really interesting perspective on art. As an undercover FBI agent, Wittman has to be informed about the historical significance of the art in his cases, but it is also clear that he views art as objects and historical artifacts. There definitely is nothing wrong with this perspective, and it is a logical perspective for Wittman (since he’s interested in recovering a physical object that has been stolen).

Anyhow, it was interesting to think about Wittman’s apparent “art as object” perspective, since art historians sometimes forget that a work of art is, in its essence, an object: art is paint on a canvas, a block of marble, or metal. I think art historians often “mysticize” or elevate works of art to the point that the objects are exempt from their actual physical properties. Gombrich, for example, tried to humanize art by comparing it to the complexity of “real human beings” (see here). In some ways, I don’t have issue with this perspective either, but it’s interesting to think about how art historians sometimes divorce themselves from the physicality of the art they discuss. But I digress. The point is: it was interesting to see Wittman approach art from a different (more practical?) perspective than I usually encounter among art historians and critics.

Although I would have enjoyed reading more about the historical background for some of the art pieces, Wittman provided a decent amount of information. (Also on a side note, Wittman also works to recover historical artifacts, such as an original copy of the Bill of Rights. These cases are also interesting, but I assumed beforehand that I would only be reading about stolen fine art.)

I especially was interested in reading about the theft of Norman Rockwell’s Spirit of ’76 (1976, shown right).1 This painting was stolen from a gallery in 1978 and was never recovered. The FBI closed the case a few years after the theft, but the case resurfaced in the mid-to-late 1990s, when it became known that the painting had was in the possession of an art dealer in Rio de Janeiro. Wittman was deeply involved in this case by the time of 9/11. Unsurprisingly, the interest in Rockwell and Americana surged after 9/11, due to the rise of patriotism in the American people. Therefore, a whole new dimension and meaning was added to this case, given the 9/11 happenings and interest in Rockwell. And, even more interestingly, Rockwell’s Spirit of ’76 includes an image of the “Twin Towers” (shown in the bottom right corner of the painting). In fact, the inclusion of the “Twin Towers” helped give impetus to finishing this case and recover the artwork from Brazil: officials realized it would be a great public relations move.2

I’d recommend this book to anyone who likes art crime. I think Americans will find the cases especially interesting and meaningful, since Wittman recovered many objects that are significant to American history. However, there are several European pieces that Wittman also recovers/mentions. Really, though, I think that this book would appeal to most people who are interested in art and art crime.

1 I can’t help but add that Rockwell’s composition was inspired by Archibald Willard’s classic Spirit of ’76 (“Yankee Doodle,” the linked version dates c. 1875) 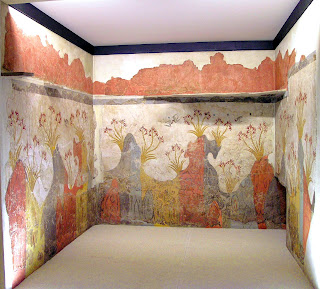