Tonight I’ve been researching why the so-called “Peplos Kore” (c. 530 BCE, shown left) might not be wearing a peplos garment. (A “peplos” is a rectangle of cloth that is pinned at the shoulders and worn with a belt – it gives the effect that the woman is wearing a blouse. And “kore” means young woman; it is a name given to certain female statues made by the Greeks.)

This current “un-peplos” argument is based on recent reconstructions and studies of the figurine. Instead of a peplos, it is thought that the statue is wearing a long robe, cape, and an ependytes (an outer garment which is a metal-like sheath divided into regular, rectangular compartments).1 The ependytes was an Eastern garment associated with divine power, and therefore suggests that this figurine would have represented some type of goddess, perhaps Artemis or Athena.

This argument has been solidified by the recent reconstructions of the Peplos Kore by German archaeologist Vincenz Brinkmann.2 I suppose that now the problem is to try and ascertain which goddess could be depicted. The statue’s missing right hand probably held some object to help ascertain her identity (like a bow for Artemis). Brinkmann favors the idea that the goddess is Artemis (although alternate theories have been presented by others).3 Anyhow, here are some possible ideas presented in reconstructions of the Peplos Kore: 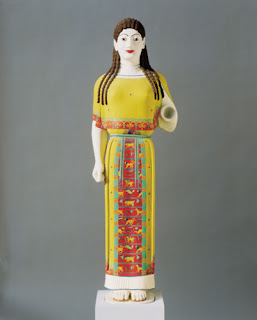 Reconstruction of Peplos Kore (as Athena) by Vincenz Brinkmann, 2004
I really like the animals shown on this ependytes, but I can’t tell what if a mythological narrative is depicted in the reconstruction. I kind of doubt it. But if anyone wants to have a guess at what might be depicted, you can click here to see better details of this reconstruction.

Reconstruction of Peplos Kore (as Artemis) by Vincenz Brinkmann, 2004
Reconstruction of Peplos Kore by Cambridge University; first painted in 1975, repainted in 1996
Although this last image is of an older reconstruction, I thought I would still include it. As mentioned here, this Cambridge reconstruction supports the idea that the statue represents someone who is offering a gift (which looks like an apple or pomegranate) to the gods (instead of actually representing a goddess, as argued by Brinkmann). She is shown as wearing a meniskos, an umbrella designed to protect the statue against the weather and bird droppings.
I don’t know if we’ll ever have a concrete idea of what this statue looked like in terms of color and the ependytes design. There just aren’t enough paint samples for us to have a completely accurate reconstruction. Plus, it will be hard to know specific details unless we ever come across the kore’s missing arm/hand. But it’s fun to think of the how this sculpture might have appeared (and who actually was represented!).

2 Ibid. You also can read an English review of Brinkmann’s publication here (review by by Brunilde Sismondo Ridgway). Be sure to check out the penultimate paragraph and footnote #12 to find out more information about the Peplos Kore argument.