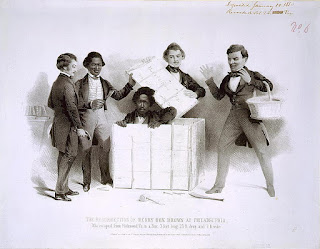 Have you ever picked up a book and pleasantly discovered that the reading was more interesting than you anticipated? I recently read The Unboxing of Henry Brown by Jeffrey Ruggles, and I ended up feeling that way. I’m very interested in issues of slavery/antislavery in the United States (and elsewhere), and for a long time I’ve wanted to learn more about Henry “Box” Brown. I didn’t anticipate reading about art history when I picked up this book, though, but was excited to find a lot of discussion about the moving panorama, a popular form of art (and entertainment) in the mid-19th century.

Before reading this book, the only thing I knew about Brown was his escape from slavery: he climbed into a box and shipped himself from Virginia (a “slave” state) to Philadelphia (a “free” state). Various images of Brown’s “resurrection” from his box (the one above is from Boston, 1850 (unsigned)) were used by abolitionists. One art historian commented that these images of the unboxing were “perhaps the most potent single metaphor [that abolitionists used] for the displacement of the traditional image of the ‘runaway’ slave in popular imagination.”1

The thing that surprised me most about this book, though, was to learn how Brown decided to earn a living after escaping from slavery. Brown commissioned a moving panorama to be painted, which he titled Mirror of Slavery.2  Moving panoramas consisted of huge canvases (sewn together) which were displayed on a type of vertical spool. The paintings could then be scrolled in front of an audience, revealing a sequence of scenes. In some ways, the moving panorama was the predecessor to the slide show.  (If you like, you can get a sense of the moving panorama idea by watching the beginning of this scene from the film “Letter from an Unknown Woman,” 1948).  During the middle of the 19th century, the moving panorama was an extremely popular form of entertainment. It’s sad that few moving panoramas exist today. Those that do exist are never shown in their original format, either, largely due to conservation issues.

Anyhow, for several years Brown traveled around the United States and England, giving presentations and lectures while exhibiting his moving panorama. I have to admit – while I was very interested to learn about Brown’s life, I found it even more fascinating to learn more about the moving panorama. Although I was familiar with the idea of the moving panorama before, I didn’t realize that such an artistic device helped to aid the antislavery movement.3

2 Henry “Box” Brown’s moving panorama was painted by three painters from Boston, with the primary artist probably being Josiah Wollcott. The other artists are described in an 1850 newspaper from Liverpool as “Rouse and Johnson.” Ruggles suggests that these artists might have been Samuel Worcester Rowse and David Claypoole Johnston. See Ruggles, p. 75.

3 Henry “Box” Brown was not the only person to use the moving panorama to discuss slavery. Ruggles mentions a couple of others who also produced moving panoramas, including the black abolitionist William Wells Brown. See Ruggles, p. 72.