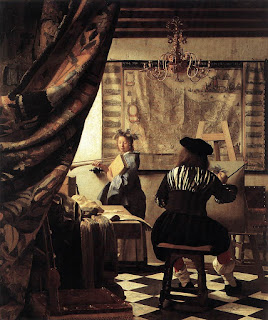 Like many other art historians, I have learned that Vermeer probably used the camera obscura to help in the creation of his art.  However, I recently learned that Vermeer also employed a simpler and more rudimentary method to help him create perfect perspectival lines.  To start, Vermeer would often use a pin to create a small hole at the vanishing point within each painting.  Of the 35 known works that exist by Vermeer, approximately half of his paintings still have pinholes that can be seen with the naked eye.1  In The Art of Painting (c. 1666, shown right), the pinhole (and therefore vanishing point) is underneath the female model’s right hand, close to the knob for the map holder.

Vermeer probably attached a piece of string to the pin that he stuck in his canvases.  By using string, Vermeer could create perfect orthogonal lines which would converge at his pinhole.  If one recreates the string-and-pin method on The Art of Painting, the perspectival lines of the tiles and table perfectly align with the pinhole as the vanishing point.  Some scholars like Robert D. Huerta have even gone so far as to say that Vermeer might have put chalk on his string (see first full paragraph of link), and then snapped the taut string to leave a chalk line on the canvas.  This way, Vermeer would have had an easy (and erasable) marker while he worked to create an illusion of space.

It seems like Vermeer was a pretty clever guy.  After all his work on perspective though, one thing about this painting strikes me as funny: have you ever noticed that the artist in the foreground is disproportionately large in comparison with the female model?  If the artist stood up, he would be twice the height of his model.  Do you think that Vermeer was so focused on creating the perspectival illusion that he didn’t notice the figural disproportion?  The National Gallery of Art’s website defends Vermeer by saying that the disproportion is symbolic, emphasizing the artist’s central role in the allegory.  Perhaps that is the case, but the gigantic artist always catches me off guard.

1 “The Art of Painting” episode in the BBC series The Private Life of a Masterpiece (2008) reports that 17 paintings have pinholes that are visible to the naked eye.  This seems to be the most up-to-date information on the topic.  Essential Vermeer mentions that 13 paintings contain pinhole images (including ones visible through x-ray), but appears to be citing an earlier source from 1995.  See Jørgen Wadum, “Vermeer in Perspective,” in Johannes Vermeer edited by Arthur Wheelock, New Haven: Yale University Press, 1995, 67-79.

The Art of Painting is one of the featured works of art in “The Private Life of a Masterpiece” BBC series. One of the fun things that I learned from his episode was that the red undergarments of the artist (look at his legs) were a mark of fashion.  Red was a preferred color for clothing at the time, since red looked warm and cozy.  If you’re interested, you can win a copy of this episode by entering my giveaway to receive a free DVD set of “The Private Life of a Masterpiece” BBC series.