I just finished reading The Genius in the Design: Bernini, Borromini, and the Rivalry That Transformed Rome by Jake Morrissey.  It was a pretty good book, although I fluctuated between being bored and fascinated.  Morrissey covered a lot of information that I already knew (his discussion of St. Peter’s building history bored me to no end), but he also presented many things that were new to me.  It’s always interesting for me to read popular history books like this one. I vacillate between feeling like a scholar (by already knowing the information that’s presented in the book) and feeling like an idiot who doesn’t know anything.  I guess such vacillation is good, in a way.  There is always more to learn on a subject, and it’s good to be reminded of that.

This book revolved around the artistic rivalry that existed between Borromini and Bernini during the 17th century.  Although the artists worked together for many years (did you know that Borromini helped Bernini make the baldacchino inside St. Peter’s?), they eventually had a falling out.  The two artists ended up competing for some of the same commissions.  Things turned especially ugly when Borromini publicly and vehemently critiqued the instability of Bernini’s bell towers at St. Peter’s.  It’s interesting to realize, though, that although they two artists were rivals, they also undoubtedly influenced the work of each other.  Morrissey points out one such influence by suggesting that Bernini’s Scala Regia (1663-1666) was influenced by Borromini’s colonnade at the Palazzo Spada (1652-53).

As I was reading Morrissey’s book, I thought about another possible way that Borromini may have influenced Bernini.  Morrissey quotes Borromini’s description of his church Oratorio dei Filippini (Oratory of Saint Philip Neri, 1637-1650, shown left in a 1658-1662 engraving by Domenico Barrière).  Borromini designed this church with specific intent to reference the human figure.  He wrote in his treatise Opus Architectonicum, “In giving form to the facade…I created the figure of the human body with open arms as if it embraces everyone who enters; and this open-armed figure is divided in five parts, that is, the chest in the center, and the arm, each in two sections [arm and forearm] as they open out.”1 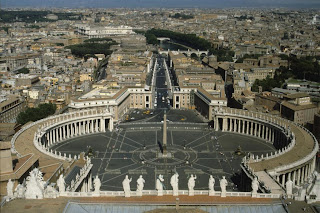 This quote immediately reminded me of the many interpretations of Bernini’s piazza of Saint Peter’s (1656-1667, shown right), which has also been analyzed as anthropomorphic in form.  In fact, Howard Hibbard notes that Bernini himself compared the colonnade of the piazza to those of outstretched arms (just like Borromini’s comparison with the Oratorio dei Filippini and open arms!).  Hibbard writes, “The image of the piazza was likened by Bernini to the outstretched arms of the Church welcoming the faithful, so that even this seemingly pure architectural creation has an anthropomorphic, and even quite sculptural connotation and function.”2

Is it just coincidence that these two rivals both used the imagery of oustretched, open arms for their architectural designs?  I doubt it, especially considering the rivalry between these two men.  I think that Bernini’s architectural “arms” were influenced by Borromini’s “arms” at the Oratorio dei Filippini.  Borromini’s church was completed just six years before Bernini began work on his project. And, furthermore, the manuscript of Opus Architectonicum (in which Borromini outlines his explanation of the “arms” idea) is dated to 1656, the same year that Bernini began work on the piazza of St. Peter’s.  What if Bernini got a look at Borromini’s treatise or heard of some of the ideas contained therein?  I think it’s possible that Borromini’s “arms” theory may have actually influenced the piazza design at St. Peter’s.3

3 I realize that other architectural theories exist which compare architectural forms to the human figure.  Even the ancient Roman writer Vitruvius compared the proportions of the Classical orders to the human form.  Admittedly, Borromini is not the first architect to come up with this comparison between the human form and architecture.  However, I wonder if Borromini could have been the first to incorporate the welcoming outstretched arms in architecture, particularly in its propagandistic role for the Counter-Reformation.  If that’s the case, then Borromini has once again been relegated to the sidelines, since most people associate this propagandistic idea of Catholic arms/hugs/embraces with Bernini’s piazza.