The world of early 20th century painting may have just sustained a serious, permanent blow. If you follow the happenings in the art world, you may have already read that the Museum of Modern Art in Paris was robbed last night. Five paintings were stolen, totaling around $123 million. The especially sad thing about this news? Only 12-15% of stolen paintings ever resurface. Here are images of the five stolen works: 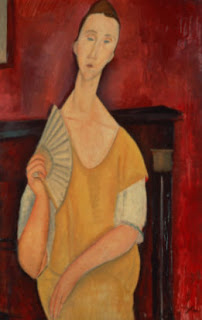 Braque, Landscape with Olive Tree, 1906
(Isn’t it fun to see Braque’s work from his Fauvist days, before he and Picasso delved into Cubism?)

Leger, Still Life with a Chandelier, 1922
I hope that the museum ends up offering a reward for the recovery of the paintings. As discussed in a blog for The Economist, sometimes offering a reward is the most effective thing that a museum can do.
Whenever art gets stolen, I always have the secret hope that someone in the art world hired thieves to steal the art, with the intent of later staging a recovery for the stolen goods. When art is stolen-and-recovered, it tends to bring higher prices at the art market. After all, wouldn’t you want to own a work of art that was famously stolen in a museum heist? And wouldn’t you like the reassurance that a painting was valuable, since someone took the time to steal it? The history behind any work of art always affects its market price.
In other art crime news, last week the Feds arrested three people involved with an art heist conspiracy in the Seattle area. A disgraced gallery owner (who had served three years in prison for art theft) had conspired with a cellmate to steal works by Picasso, Renoir, and other Northwest artists. You can read the full story here.