Today I came across an article that discusses a new theory regarding Caravaggio. Researcher Roberta Lapucci argues that Caravaggio used light sensitive substances (in essence, a very primitive form of photography) in order capture his figures on canvas. You should read this article and Lapucci’s arguments – it’s quite interesting.

But although I think that this is a really novel and fascinating idea, I have my doubts. Part of Lapucci’s argument rests on the fact that Caravaggio used an “abnormal number” of left-handed subjects in his early works, since a light sensitive image would have been projected on a canvas backwards. (According to Lapucci, Caravaggio later depicts right-handed subjects in his paintings, which indicates that the artist used improved darkroom technologies in his later career). My problem with this argument is that I can only find three Caravaggio paintings with (possible) left-handed subjects, even in his early works. Just about all of the sitters appear to be right-handed (for example, see Judith Beheading Holofernes, Boy Peeling Fruit, Lute Player, and The Musicians). Here are the only lefties that I found: 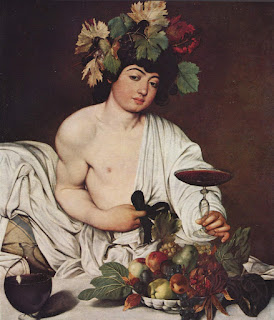 Caravaggio, Bacchus, c. 1597
(A discovery regarding this painting was recently in the news – see my thoughts here)

Caravaggio, Catherine of Alexandria, c. 1598
Does Lapucci consider this subject to be left-handed, since
her left hand is closer to the handle of the sword? Hmm.

Caravaggio, Saint John the Baptist, 1610
This is a late work (in terms of Caravaggio’s career), but the sitter is using his left hand to hold a staff. (Does that mean, though, that he is left-handed? Or that light sensitive technology was used? Hmm.)

And…that’s it. From what I could find, those three are the only Caravaggio paintings that possibly manifest left-handed subjects. Feel free to try and find others – I’d love to see if anyone finds more lefties in Caravaggio’s work. For now, though, I feel like this part of Lapucci’s argument is pretty weak. You can decide for yourself, gentle reader, whether the number three constitutes an “abnormal number” for left-handed subjects.