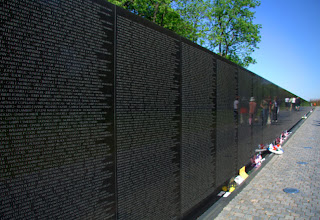 I have to admit, I’ve never thought that the Vietnam War Memorial (1981-1983; National Mall, Washington DC) was especially interesting or intriguing. I think it is a serene, respectful tribute to those who died in the Vietnam War, but I can’t spend hours and hours thinking about the aesthetic or design of the structure. Don’t get me wrong – I like the feel and look of minimalist sculpture and architecture, but I just can’t pontificate much about the, uh, minimal qualities of the work. (And art historians love to pontificate!) For this reason, I’ve always kind of skimmed over the Vietnam War Memorial in my art history textbooks and lectures.

However, one of the reasons I started this blog was so I could learn more information about various art pieces and (hopefully) gain more appreciation for them. So, in light of Memorial Day, I decided to read more about the Vietnam War Memorial. And I’ve learned some fascinating information about controversy that surrounded the completion of this memorial.

In 1981, Maya Lin was 21 years old when her design was chosen (out of 1,421 final entries) for the Vietnam War Memorial. The V-shaped black granite is partially lowered into the ground. I didn’t realize this before, but this monument is lowered in the manner of ancient burial grounds.1 The jury selected Lin’s design because they felt like the simplicity of the design would be least controversial. However, many people were upset with the design choice, arguing that the contrast of the black granite against the nearby white memorials could be interpreted as a criticism of the Vietnam War (and a criticism of the efforts expended by those who fought in the war).2 Furthermore, critics were upset with the black color of the granite; one veteran argued that black is “the universal color of shame, sorry and degradation in all races, all societies worldwide.”3 As a compromise, the Commission of Fine Arts decided in 1983 to commission Frederick Hart to create a realistic bronze sculpture of three armed soldiers (shown right). This sculpture which was eventually placed about 100 feet from the memorial wall. About a decade later, a group of nurses got permission to erect a sculpture honoring women’s service in Vietnam. Glenna Goodacre was commissioned to built this sculpture, and it was placed in 1993 about 300 feet south of the memorial (see an image here).

I’m a little surprised that Maya Lin’s memorial caused so much debate and controversy, although it makes sense. I think that people usually have strong opinions whenever a memorial is built, because so much emotion is connected to the purpose of constructing a memorial. Personally, I think that the black granite is effective and appropriate – the reflective surface ensures that anyone who reads the names on the memorial will become active “participants in the experience of remembering the dead,” because the reader can see himself/herself mirrored against the names.

Here’s to remembering our dead, and those who sacrificed so that we can enjoy freedom. The Vietnam War Memorial lists 57, 939 casualties (including those M.I.A.). It’s mindboggling and humbling to think of how many people have died in other wars, especially since our armed forces are overseas at present.

What do you think of Maya Lin’s monument? Do you find the design controversial?