Of all of Gaudi’s works, I am most familiar with the Casa Mila. (1907; Barcelona, Spain) However, I think that the cathedral La Sagrada Família (also in Barcelona) is the most fascinating of Gaudi’s masterpieces. This cathedral has been under construction since 1882, and will probably be finished in about twenty years from now (which will be around the 100 year anniversary of Gaudi’s death).

Gaudi lived during the turn of the century (fin de siècle) from 1852-1926. His architecture has been classified as Art Nouveau, but really, there isn’t a category or movement which completely fits for the work of this original, innovative thinker. The thing that I like most about Gaudi’s mature style is his fascination with natural forms; his architecture often mimics or recalls things found in nature. Gaudi believed that his buildings were “symbolically a living thing.”1 Although I have never personally been inside a building by Gaudi, I think that his architecture really looks animated and vivacious in photographs. In La Sagrada Família , I love how the inclusion of gables (the triangular shape framing the portals and doorway) follows the Neo-Gothic tradition, but Gaudi has morphed the triangles to appear more naturalistic, as if canopies of stalactites are forming in place of static architecture. (You can see more detail of the gables by enlarging the photograph above.)

This inclusion of stalactites and naturalistic features helps to ease the transition between modernism and traditional Neo-Gothic elements, with the (literal) pinnacle of individualism finding itself in the four towers. 1 I think these towers are so interesting and striking. They are simple paraboloids in shape, with the sides perforated for acoustic reasons (the towers were intended to hold tubular bells). The plan of this church calls for eighteen towers – what a spectacle! You can see a model for the completed church here. 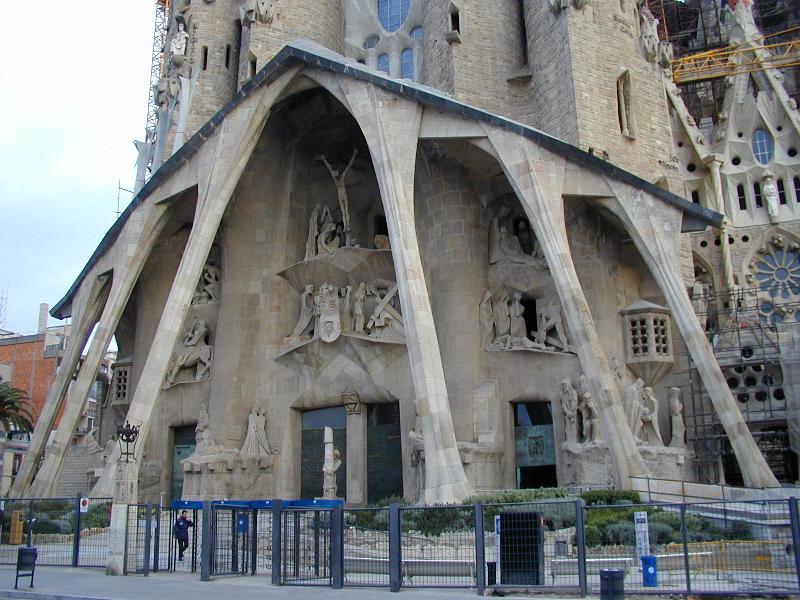 I also think it’s interesting that Gaudi was able to design this cathedral in such a way that it does not employ flying buttresses. However, I think he kind of mimics and alludes to flying buttresses in his decoration of the Passion portal (shown to the left), with the slightly curved supports that lean into the building. Once again, I feel like he is alluding to traditional architecture, but changing it to be original and modern.

The interior of this building will finally open for services sometime next year. It would be fun to go inside then, but I really am excited to go inside when this cathedral is finally completed. Plus, I’m curious to see how much of the final product compares to Gaudi’s original plans.