Last night I went to Seattle University to hear W. J. T. Mitchell speak. I remember studying writings by Mitchell as a grad student, and I was intrigued by his lecture title, “The War of Images: 9/11 to the Present.” The lecture was interesting and I was struck by Mitchell’s persona; he was approachable and seemed to be constantly thinking and reviewing new ideas.

A large part of Mitchell’s work revolves around the discussion of words and images – how words and images are different, what words are used to describe images, etc. I was not surprised in this lecture, therefore, to see that Mitchell was interested in the examining the word “terror” and the metaphoric war that is currently being waged on the emotion signified by that word. (How are you supposed to fight an emotion?)

During the lecture Mitchell showed many pictures that have been distributed and displayed as a result from the “war on terror.” I was living out-of-the-country when the Abu Grahib photos began to emerge, so I had to read a little more about them after the lecture. These images of prisoners being tortured and abused led to an internal investigation within the US Army. It is thought by many that this “Hooded Man” depiction will always be remembered as the iconic photograph for the war in Iraq: 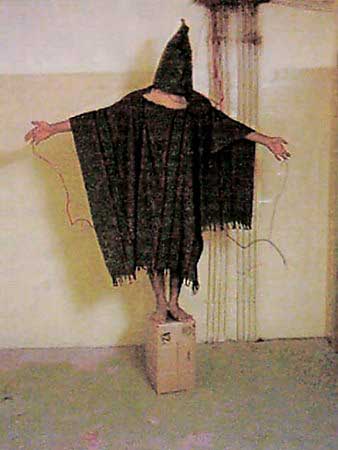 Mitchell showed different places and instances where this Abu Ghraib photograph has emerged and reemerged as part of the discourse on the war. As a counter-message, reproductions of the “Hooded Man” appeared in a silkscreen format that parodies the current iPod ads:

Mitchell briefly suggested that in addition to decrying the war in these iRaq posters, another counter-message is created by referencing the iPod – the iPod is related to self-pleasure. Although we didn’t end up discussing any narratives or ideas created by this contradicting image of self-pleasure and torture, I think it’s an interesting idea. (Does anyone want to further this idea or suggest a narrative?) In addition to self-pleasure, I think that the iPods also embody self-absorption; one seems to shut out the world when iPod buds are in their ears. It’s interesting to think about this poster in regards to the criticisms of self-absorption that have been heaped upon the Bush administration and America since the inception of this war.

I was surprised that Mitchell showed only a few pictures of Saddam Hussein, not for political reasons but for historical comprehensiveness (my bias as a historian is apparent!). The first photograph, shown right at the beginning of the lecture, was an equestrian statue of Hussein. As a historian, I think of the equestrian statue tradition as connected with antiquity. I wondered if by selecting this photograph Mitchell was historicizing Hussein’s role in the war, perhaps suggesting that Hussein’s role in the war is dated and passé, like this statuary tradition. I also thought this equestrian statue seemed very irrelevant and out-of-place with the other images shown in the presentation; the other images were more contemporary and often used Photoshop technology. It was interesting to think about what kind of statements about the war and Hussein’s role could be derived from a “dated” and perhaps “irrelevant” image. Interestingly, though, the last image in the presentation was also of Saddam Hussein, this time a photograph of the leader soon after his capture. By depicting Saddam’s medical examination by an Army doctor, I think this photograph was supposed to show the concern of the Americans for their prisoner. However, Mitchell pointed out that this photograph actually a degrading and humiliating depiction of Saddam:

It didn’t take long for people to criticize the American government through this photograph. In Mitchell’s presentation, a caption included with this photo (no doubt found by Mitchell on the internet, but I can’t find where), said “The search for weapons of mass destruction continues…”

I felt like this was a fitting photograph for the end of the lecture. Since I felt the inclusion of the equestrian statue dated and historicized Saddam, I liked that Mitchell included an active, more contemporary photograph of Saddam at the end of the presentation. Although Saddam was not responsible for the 9/11 attacks, I felt that his historical role with the (ongoing) Iraq invasion was better represented with this final photograph. To me, it was appropriate to view this photograph and caption while Mitchell explained that the war on terror (and the war of images) still continues today.