Rethinking the Family of Charles IV 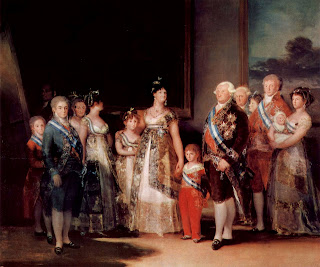 Like most people who study art, I was taught that Goya’s portrait, Family of Charles IV (1800-1801), is a caricature of the royal family. Most introductory art history textbooks discuss the ugly features of the family members and their awkward poses. In short, the painting was supposed to reveal the stupidity of the royal family. I further interpreted this picture to show the family in an unflattering light – who in the royal family would approve of having a young woman (on the left) painted with her face turned towards the wall?

In fact, I was going to write a post on this unflattering portrait until I began to do some more research this morning.

Recently (within the past decade), there have been new arguments regarding Goya’s portrait of Charles IV and his family. Edward J. Olszewski argued in 1999 that the Goya adds a sense of animation to this portrait because the sitters lack a common focal point. However, he also admits that there is a lack of unity that resulted because Goya sketched the members of the group individually, not collectively.1 He argues that the family members approved of the sketches that were taken for the portrait. Suggestions that a family member looks “foolish” or awkward are because the elderly Dona Maria Josefa was suffering from the effects of lupis (she died shortly after the portrait was completed) and Dona Maria Luisa Josefina (on the far right, holding a baby) suffered from a spinal defect.2 In addition, Olszewski finds the brilliant colors and pigments in the painting to be very favorable; they were quite modern for the period.

I also learned from Olszewski’s article that the woman on the left side of the canvas (with her face turned towards the wall) is the future bride of the prince regent, as yet unchosen. Of course she would be depicted with her face towards the wall, since the family wasn’t sure whose face to portray! Maria Antonia could have been painted in the portrait after she and Ferdinand married in 1802, but Goya was never asked to change the painting.

As for the infamous critic’s statement that the painting looks like a “grocer and his family who have just won the big lottery prize,” Alisa Luxenberg wrote in 2002 that this statement has been misquoted.3 Several historians have picked up on this quote and scattered it throughout art historical texts. She and Olszewski both point out that a similar quote was stated by Renoir in 1907. Renoir mentioned that the portrait looked “like a butcher’s family in their Sunday best.” However, the point of this comment was not to pinpoint the painting as caricature. Instead, this statement was an indication of Renoir’s belief that “an artist’s ‘true’ personality – meaning class to Renoir, who seemed acutely sensitive to his own working-class roots – manifests itself in art. In the recounting of this discussion, Renoir supposedly explained that Goya’s plebian background emerged in his rendering of artistocrats as shopkeepers.”4

These articles have made me rethink the Family of Charles IV portrait. I still don’t find many of the family members to be terribly attractive, but this doesn’t mean necessarily that the portrait is a caricature. Instead, perhaps this portrait is a paradigm for its age; with the ongoing Enlightenment in the 18th century, perhaps the stress on scientific, visual evidence affected the production of idealized portraiture? Maybe the members of the family wanted to be portrayed as how they really looked, whether attractive or unattractive.

If you want to read more, I would particularly recommend Olszewski’s article. It’s quite fascinating.