Can You Guess the Artist?

If a famous artist like Leonardo da Vinci passed you on the street, would you recognize him? There is little doubt that you would instantly recognize his painting of the Mona Lisa, but what about the face that created the Mona Lisa? I have a feeling that most people wouldn’t recognize a majority of famous artists, but I might be wrong. Try and guess the artist depicted in each of these portraits/self-portraits. (I tried to avoid self-portraits that are too indicative of the artist’s style – I don’t want that to give the answer away!) The answers are in the comment section of this post. 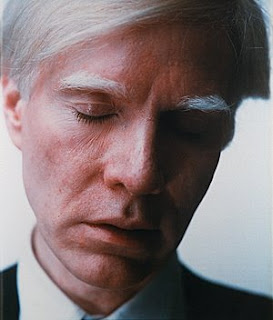 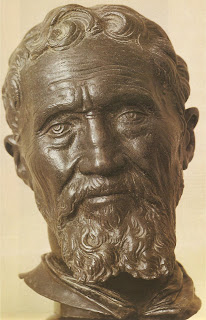 I never thought I would be interested in reading an article in my father-in-law’s Radiology magazine. However, I was intrigued that the cover of their recent issue has a picture of the famous Nefertiti statue bust (made by the artist Thutmose, Dynasty XVIII (ca. 1353-1335 BC)). Recently, some computed tomography (CT) performed on the core and surface of the statue bust has revealed new information.

According to this article, there are slightly different physical characteristics which appear on the inner core of the statue (consequently revealing a “second hidden face”).1 On the inner core, the CT revealed that there “creases around the corners of the mouth and cheeks, a less harmonious nose ridge, and less prominent cheekbones. The nose [also] showed a slight bump.”2 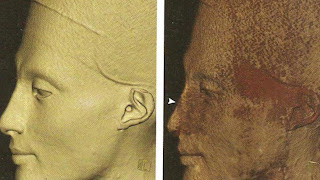 Although the outer surface of stucco refined and softened these wrinkles and bumps, it is also interesting that there is a more pronounced shaping of the eyelid corners on the outer layer (see image below). This emphasis on the outer eyes supports interpretations that this bust was supposed to be recognized as a depiction of a mature woman, not of a woman of flawless beauty.”4 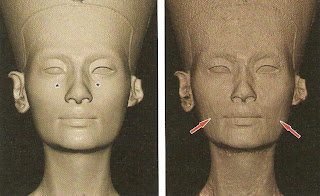 The shaping of the eyelid corners on the outer (visible) surface can be seen on the right (indicated by *). On the inner core (left) creases in the corners of the mouth (arrows) were found.

I think it’s fascinating to look at different facial characteristics on the inner core – perhaps the inner core is a more correct representation of how Nefertiti appeared in life. It’s great that technology can help historians and archaeologists learn more about art. In this study, CT also showed more information regarding the types of tools and materials that were used to sculpt the bust. In addition, further details were revealed about the thickness of the stucco, which will serve as useful information for conservators.

Although I didn’t understand all of the scientific terminology or system of measurement used in this article, it was still interesting to read. Perhaps I should pick up Radiology more often?

1 Alexander Huppertz et al, “Nondestructive Insights into Composition of the Sculpture of Egyptian Queen Nefertiti with CT,” Radiology 251, no. 1 (April 2009): 236.

2 Ibid. On a side note, I think that this slight bump makes Barbra Streisand’s tribute to Nefertiti seem especially appropriate! This photograph of Streisand was taken in conjunction with a 1966 episode of “Color Me Barbra,” in which Streisand performs in the Philadelphia Museum of Art next to the bust of Nefertiti. 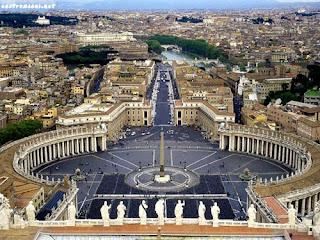 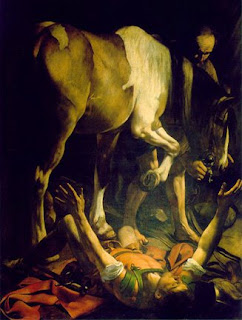 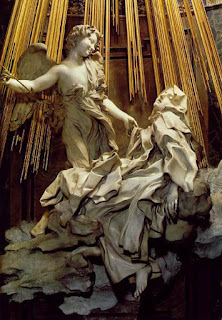 All of the sudden, today’s results from a Google search made me feel like I had a huge group of new friends.

In recent editions of art history texts, the Mesolithic period (“Middle Stone Age”) is only briefly mentioned as a “transitory” era between the Paleolithic and Neolithic (“New Stone Age”) periods. I think that the word “transitory” is used because the early Mesolithic period was an age of hunting and gathering, whereas the end of the period saw the development of farming. In regards to art, though, I think this period is difficult to discuss because it is hard to interpret Mesolithic art. Soren H. Anderson points out that while some Mesolithic artifacts are decorated, we do not know the intent of the decoration. These objects could have been marked to indicate ownership, gender differentiation, or social rank.1 Any deeper symbolic meaning of these decorations is impossible without a knowledge of the mythology of the Mesolithic people.

Some Mesolithic rock paintings that I like are located on the east coast of Spain. It is very likely that these paintings in shallow rock shelters originated from cave art. Above is a reproduction of a cave painting at Cingle de la Mola, Remigia (Castellon, Spain), c. 7000-4000 BC. The legs are spread wide apart, which suggests that the men in the group are either leaping or marching, perhaps in conjunction with a ritual dance. I think these paintings are interesting because they show individualized, descriptive features like the headdress of the leader. Art historically, these images are important because they show the human figure in a composite view – the torso is shown from a frontal perspective, whereas the legs and head are shown in profile. Obviously, it would be impossible for the human body to contort into this position, but the composite view allows for a more descriptive, detailed depiction of the human body.

There are other interesting artifacts from the Mesolithic period as well, such as amber statues of wild boar from Scandinavia. In Norway, rock engravings of elk, furred creatures (such as foxes) and small whales have been found along the coast and freshwater concourses 1. I especially like the Azilian painted pebbles (shown left, c. 9,050 BC (c. 11,000 BP)) that come from the Mesolithic period. The function of these rocks is unknown; some scholars think that they might be for a cult ritual, but I am drawn to a different interpretation that the painted forms represent letters or numbers (some type of writing system).