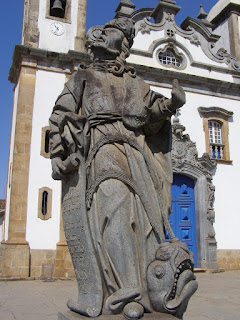 This month marks the one year anniversary of my thesis defense. I think I will always associate Leap Year Day as the day I became a Master of Arts. I can’t believe that a whole year has passed; sometimes I think that I haven’t done enough with my degree.

I really loved working on my thesis. I was lucky to receive a grant which enabled me to travel to Brazil and do research and analysis on-site. My thesis was about an 18th century Brazilian sculptor named Aleijadinho (a nickname which means “The Little Cripple”) who lived during a time of political unrest in Brazil. I argued that Aleijadinho’s sculptures of twelve Old Testament prophets (located at the church Bom Jesus dos Matozinhos) reflect this political unrest because they are positioned in the movements and formations of capoeira, an Afro-Brazilian martial art. Capoeira is inherently political because it probably developed as a way for African slaves to fight their way off of plantations. Therefore, I interpreted these statues as a type of political propaganda; through the representation of capoeira, I find that these statues exhibit a call for liberation for not only African slaves, but also Brazilian colonists (who were under Portuguese rule at the time).

Chapter one of my thesis discusses the political unrest that occurred in Brazil during the lifetime of Aleijadinho. It also discusses how Aleijadinho may have been associated with the rebel group, the Inconfidência Mineira. This group formed in Aleijadinho’s hometown and tried to overthrow the Portuguese crown. Chapter two deals with the history of capoeira and its political associations. Chapter three contains my analysis of the Prophets – I look at specific capoeira movements and compare them to different statues. I also compare capoeira formations with the formation of and interplay between the Prophets statues. The chapter also contains an analysis of how the signifiers of capoeira (as found on the statues) can be interpreted as political propaganda.

Phew – it was hard to type those last two paragraphs. I guess I haven’t had a lot of practice explaining my thesis lately! If you want to read an abstract of my thesis (it contains more details than what I typed above), click here. Or, if you want to read my thesis (or look at the pictures of the statues!), it has been published online here. It’s quite a lot of reading, though. I won’t be offended if you just want to peruse.