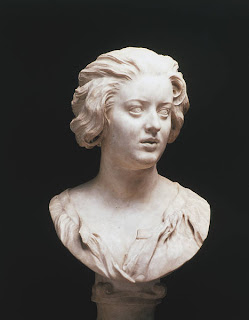 So, apparently, good things can come from being forced to return illegally obtained works of art. After the Getty museum returned around 40 illegally excavated and exported antiquities to Italy, the museum was able to receive rare Italian loans for a blockbuster exhibition of Bernini’s work – the first major exhibition for the Baroque sculptor in America. One of the loans includes the portrait bust of Costanza Bonarelli, Bernini’s mistress. Like with many of Bernini’s other portraits, Costanza is portrayed with her head turned and lips parted, as if she is about to speak. The lifelike and dramatic quality of Bernini’s portraits is just one of the things that I love so much about his sculptures.

One thing that is unusual about Costanza’s portrait is that it appears that Bernini made the bust for his own enjoyment. During the Baroque period, marble was quite expensive, and it is quite unusual for an uncommissioned marble bust to have been made at this time. In fact, this sculpture is thought to be the first uncommisioned bust in art history. 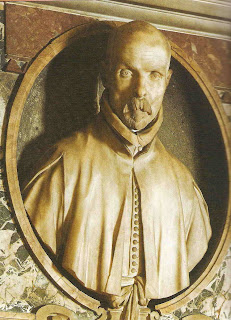 Bernini’s other portrait sculptures are just as captivating and lifelike. One of the reasons for this lifelike quality is that Bernini tried to convey different textures (e.g. hair, lace, cloth, etc.) with the marble. He also would carve deep incisions which would create shadows and thereby suggest dark color – which can be seen in the dark irises of the Pedro de Foix Montoya bust. Bernini did not have his portrait subjects sit for him while he worked, which makes his stunning likenesses even more extraordinary. When finishing this Montoya portrait, it is recorded that Cardinal Barbernini touched the priest Montoya and said, “This is the portrait of Monsignor Montoya,” and then turned to Bernini’s bust and said, “And this is Monsignor Montoya.” 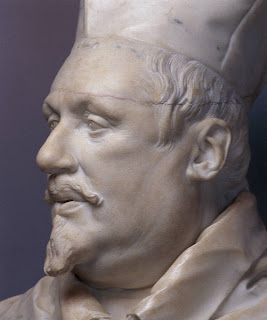 Not only was Bernini a good sculptor, but he could work quickly when necessary. When creating a bust portrait for Cardinal Scipione Borghese, an interior instability in the marble caused it to crack when it was hit with a simple, straightforward hammer tap. In this detail of the bust, you can see how the crack passed over the forehead of the cardinal and around the back of his head. Unfortunately for Bernini, who had been working on the bust for months, the portrait was near to completion when the damage occurred. With no way to disguise the crack, Bernini started completely over and completed the second bust in only fifteen days, albeit that he worked nearly non-stop. Upon completion, Bernini first unveiled the cracked version and undoubtedly enjoyed the look of horror that certainly passed over the cardinal’s face, only to then unveil the second, flawless copy.

How I wish that I could be in Los Angeles to see these sculptures! This exhibition is on display until October 26, and then will be at the National Gallery of Canada from the end of November to March 2009 . Since I don’t plan on being in L.A. or Ottawa any time soon, I guess I will need to be content with this. Sigh.

* If you’re interested in reading more about this exhibition and Bernini, you can refer to the October 2008 edition of Smithsonian magazine and Simon Schama’s Power of Art (New York: Harper Collins), 78-125.