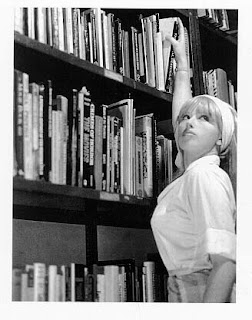 Quatorze asked me to do a post on Cindy Sherman, a photographer whose work I find very interesting. Beginning in the late 1970s, Sherman created a series of photographs which are reminiscent of Hollywood stills – however the “stills” are generic enough in setting and composition that they resist attribution to any specific film.

Sherman appears in her own photographs, often dressed in a wig and costume. She takes the photographs herself, using either a timer or a shutter release cable that she holds in her hand.

These photographs can be seen as a commentary on typical feminine post-war stereotypes of the 50s and 60s. Shown in opposition to the stereotypes that were encouraged by the (male) film industry during these decades, Sherman takes control of her image by chosing and creating her identity within the photograph. Therefore, although her image is still the object of the viewer’s gaze, Sherman is in control of her image and identity and not the viewer. 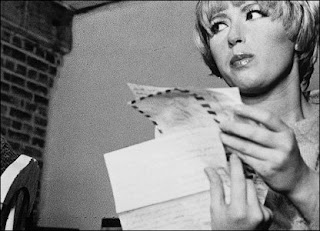 These photographs are (postmodernly) ambivalent, which has led to many different interpretations by feminists. While many find Sherman’s work to be in resistance to the male gaze and masculine order, others think that she is still working under the masculine construct of society.

I can see valid reasoning for both arguments; my personal opinion of Sherman’s work relating to both male and female paradigms was reaffirmed when I learned that Sherman’s complete set of Untitled Film Stills was exhibited in the Museum of Modern Art (1997) under the sponsorship of Madonna. Yep, that’s right, the self-made sex symbol of the music industry sponsored the whole exhibition of a photographer who has been interpreted as resisting the male gaze! Given Madonna’s interest in Sherman’s work, it is obvious to see that her photographs are subject to multiple interpretations. 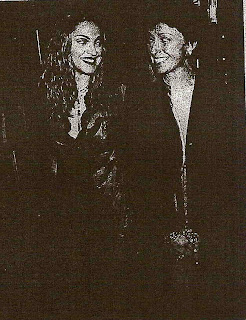 I find it completely fascinating that Madonna likes Cindy Sherman’s work. This image of Madonna and Cindy Sherman appeared in the Rolling Stone in 1997 (sorry for the poor reproduction – it’s a scan of a microfilm printout!). An interesting interpretation of the photograph appeared in this article in Afterimage, saying Sherman has experienced a role-reversal – instead of playing a starring role in the photograph (as she does in all of her own photographs), she is given second billing to the superstar Madonna. The article then continues to give an fascinating comparison and contrast of Madonna and Sherman, while also discussing the role that Sherman’s work plays in relation to media culture. One thing I found especially interesting was that Madonna is indebted to Sherman in some aspects – apparently many of Madonna’s photographs in Sex: Madonna look similar to Sherman’s film stills.

What do people think about this connection between Madonna and Cindy Sherman? For me, this reasserts that Sherman’s work really can be interpreted beyond a mere resistance of the male gaze. Plus, given Sherman’s interest in fashion (particularly outside of her film stills series), I can understand how she is interpreted as working within a masculine dominated society. But again, I can see her work being interpreted both ways. Just like the Untitled Film Series images resist attribution to a specific film, I guess that Sherman herself resists attribution to a single art interpretation.