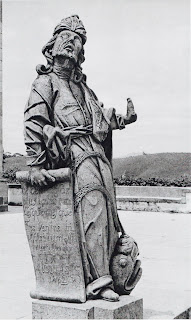 For the past week or so, I have been madly trying to research for my thesis topic before we leave for Brazil. I know that I’ll be able to ILL a lot of the books that are in the archives of the NYPL, but it just seems to make sense to look at them while I’m here. And things have been going well, sort of.

Today I ran into a couple of walls which really have made me need to decide how much conviction I have in my argument. I still believe that my argument can be supported, don’t get me wrong, but I sometimes feel like I’m paddling upstream. I wish there were more 18th century documents available from obscure areas of colonial Brazil. I wish that there was some definitive proof that my artist is not more than a legend. (I still think that the (two?) extant documents and baptismal certificate are enough, but it makes me falter when I see scholars in the field expressing doubts.) More than anything, I wish that some of Aleijadiho’s contemporaries would have taken the time to write about him. That’s most frustrating (and most disconcerting). All of the contemporary documents that supposedly mention Aleijadinho have been “lost” over time.

I think the thing that really threw me off today was researching Chico Rei. I got excited last night to draw a parallel between my argument and the construction of the Igreja Efigenia in Ouro Preto. This would be perfect for a lot of reasons (I won’t divulge them now, it would take too long). However, after reading the argument about that Aleijadinho could be only a legend, I decided take a break and research Chico Rei (the patron of Santa Efigenia). I really couldn’t find much, besides a WikiPedia account that says he is a “semi-mythic figure.”

Great. I am now writing about a legendary artist and supporting my argument with a semi-mythic figure. This will go over well at my defense.

I am realizing now how thesis conviction really is important. I really think that my argument can be supported, and I need to stand up against some of these odds.

At least I feel like I can still think critically.