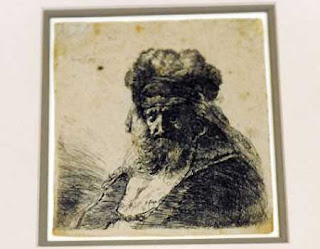 Lately there have been some connections between bathrooms and the discoveries of great/important art. Yep – I’m not kidding. Remember the couple that discovered a Raphael copy in their apartment? They found the copy after they decided to build a new bathroom in their home. And now, once again, the bathroom comes into play for another discovery:

The History Blog posted today about a Rembrandt etching that was discovered in the back of a bathroom cabinet (see above). Father O’Connell, president of the Catholic University of America (Washington, DC) found this etching in the bathroom of his office – he was looking for paper towels and ended up discovering a much older (and non-utilitarian) piece of paper. No one is sure how the etching ended up in the cabinet.

The etching was appraised and authenticated as a Rembrandt last year. This week, Catholic University of America opened a new exhibition which features this new discovery. The exhibition will be open until the May 24th.

This story sounds so bizarre – who would shove a Rembrandt in a bathroom cabinet? All I can say is, I’m positive that there’s nothing that significant in my bathroom. 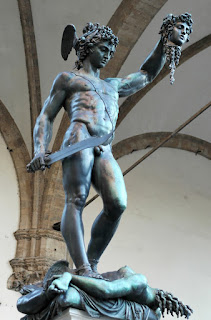 One of the things I absolutely love about teaching is that students point out details in art that I have never noticed previously. Thanks to my students, I constantly find new discoveries in works of art that have long been familiar to me.

A couple of years ago, a student pointed out a detail in the Greek kouros statue from the Metropolian Museum of Art (ca. 600 BC, Archaic period, shown right). If you click on this image, you can see a small band that goes around the neck of this statue. I never, ever noticed that necklace until a student pointed it out.

So, what’s the significance of the necklace? To be honest, I don’t know. It reminds me of the torcs that was worn by ancient Gauls (see the Dying Gaul (ca. 230-220 BC)), but I don’t know if there is a direct connection to the kouros. Really, I can hardly find any discussion on the kouros necklace, except for a few things like this short passage in an old archaeology journal: “The Metropolitan Kouros is the only example in sculpture with a neckband in relief, and is further unique in having it tied in front – examples in vase paintings always have the neckband tied in the back.” 1

If anyone knows of any information on this neckband, please let me know! I’m sure that my past student has long-forgotten that he pointed out that necklace to me, but it has piqued my curiosity for a long time. 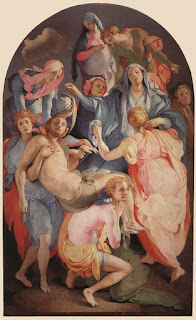 Yesterday, a student pointed out another detail that I have never noticed before. The class was looking at a reproduction of Pontormo’s Deposition (c. 1528, see left), and a student asked if we knew any information about the man who is on the right side of the painting (he is wearing a dark hat and staring out at the viewer). Until she said something, I never had even noticed that man before! In class I speculated that it might be a portrait of the artist, and I learned today that others have suggested the same thing (see similar speculations here and here). Some people think that the artist depicting himself as Joseph of Arimathea, and that makes sense to me.

I’m so glad that students point out new things to me. It’s fun to continually observe and discover new things, even as a teacher. I guess that my eye is trained to look at specific things in Western masterpieces, and sometimes I overlook small details without realizing it. Thanks for giving me a fresh perspective, class. I like to learn and find new things, too.